In a prescient TED Talk nine years ago, author Charles Leadbeater said:  “The reason why open models of innovation will emerge with tremendous force is that they multiply our productive resources by turning users into producers and consumers into designers.”

Speaking at the first Glean Social last week, UBM CEO David Levin made a similar point even more succinctly: “It’s the sages in the audience who have the answers, not the people on the stages,” he said. 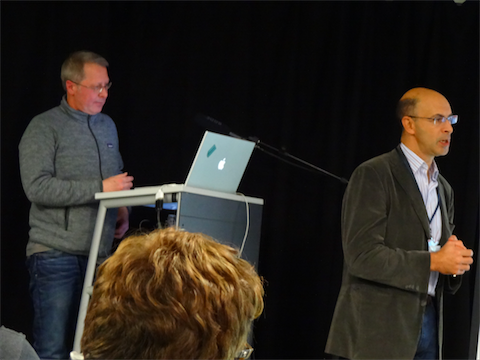 Putting the focus on the community…

The idea that your event design and operational strategy might soon be steered by what people are saying on social media still seems fanciful to many show organisers. Yet the same social media sceptics are often the first to crow about how they are listening to their audiences, gauging their views through surveys, feedback forms or focus groups.

But traditional feedback mechanisms have serious flaws if your aim is truly to generate fresh ideas for your event or organisation that really resonate with those you’re trying to reach. Multiple choice surveys are inevitably skewed towards an organiser’s pre-conceptions about what people might want, constraining people to choose from a series of often equally uninspiring options.

Asking for free-form suggestions rarely works, either. Apart from life’s natural windbags, critics and obsessives – most of whom aren’t renowned for their crowd-pleasing genius – few people will have the time or inclination to think about how you could improve your event, let alone tell you if they did (even if you promise to stick their name in a draw for an iPad).

Then there’s the supposedly Rolls Royce of feedback options – the focus group. Unfortunately, brilliant ideas are rare and could be hiding anywhere. You’re unlikely to find many – or any – among a tiny sample of your visitors, however ‘demographically representative’ that sample may be.

Often, visitor feedback is just used as marketing fodder – to find a few good quotes to stick on the website, or impressive stats to bandy around in front of potential exhibitors: “75% of attendees said they would be more likely to purchase a widget after they’d seen it at WidgetExpo. 90% said they would be even more likely to buy that widget from someone with a really big, expensive stand that has a giant screw suspended above it…” And so on.

Both David Levin and fellow Glean Social speaker Alan Moore, author of “No Straight Lines”, pointed out that when social media are used in the right way they can turn an organisation’s customers (or, in the case of event organisers, visitors) into co-creators – be it of products, events, organisational policies or anything else.

To succeed, however, you’ll need to refocus your organisation on becoming a community hub. Alan used the example of Lego. By engaging with and supporting the Lego communities already formed by enthusiasts – such as people posting animated Lego movie spoofs on YouTube – the company was able to transform its formerly flagging fortunes. For instance, by talking to fans online the company gleaned that many Lego-lovers were actually grown-ups interested in design, engineering and architecture. On the back of that realisation, the company introduced the adult-targeted Lego Architecture Studio product.

Once you have a fairly large, loyal community, you can tap into their ideas and opinions more systematically. As Alan explained, Lego has turned its customers into true co-creators with its CuuSoo range: “You come up with a design for your Lego product and upload it to the global CuuSoo platform. If you get 10,000 fans Lego will formally consider putting that product into production. If it does, it will put your name on the box and you will get 1% of the revenue share.”

There are several key elements to this strategy worth remembering. First, Lego enthusiasts come up with the ideas. Second, other enthusiasts vote on those ideas, giving Lego a true indication of how popular any particular idea is likely to be with potential customers. Third, creators aren’t fobbed off with the chance to be entered into a draw – those whose designs make it to production are financially rewarded and credited for their work, just as an employee would be. The community feels more valued and is more loyal to the company as a result. This is true co-creation.

Can this model, or something like it, translate to the events sector – for example, for the systematic co-creation of ideas to improve an event? After all, the mechanisms are simple enough. For example, you could make use of the ‘favourite’ feature on Twitter, the ‘Like’ button on Facebook or ‘+1’ on Google+. Many popular blogging platforms also have a built-in mechancism for readers to vote individual comments up and down.

The key point, though, is these mechanisms won’t work unless enough people are using them in the right spirit. And most people are only going to take the time and effort to make and vote on suggestions if they feel they have an emotional investment in your event and the community that surrounds it. In other words, your genuine engagement with the community is a prerequisite for successful co-creation.

These days, building or nurturing a community of people doesn’t just mean trying to corral them to a web forum you’ve stuck on your site. More usually, it means engaging with them naturally and honestly on their preferred social networks, where they have probably already formed communities of their own – as Lego found. Talk and listen to them, get to know them, support them, help them connect with one another.

Another point both speakers stressed is that your community won’t want to engage with your event unless you let the people who work for you engage with them (and one another) in a similar spirit – honestly, and without spin. “We need to promote sharing and engagement as core values to the business. We need to have collaboration absolutely at the heart,” said David.

And, as he concluded: “The most crucial thing we’re going to see is that an event and the web are part of one seamless continuum. You have to understand that the community continues 365 days a year and if you don’t engage things are going to move on without you.”

Make your trade show a bigger success. Get more attendees.