One of our large, recent projects has been the redesign of our social widget and we’d like to share a little bit about why we embarked on a redesign, and the process we followed.

So why did we look at redesigning our product? For a couple of reasons really… the first being the value we deliver to our clients. While there are performance improvements to be found in small changes and A/B testing, as a team we felt it was time to take a step back and revisit the product design as a whole.

The second reason was feedback we received from our clients. Our product is a pretty powerful social marketing tool; but even though it does a lot it still has to sit in the context of event organisers’ registration and size was becoming an issue.

How we approached the redesign

Given how close we are to our product, we decided to get an external UX consultant to work with us on the redesign which helped us follow best practices.

After interviewing the stakeholders in the team to clarify and document the goals of the project, our consultant conducted a review of current usage data. One output of this I found particularly insightful was having our data presented back to us in the context of the product.

Armed with a better understanding of the current product, our UX consultant generated a series of new ideas and rapidly iterated on feedback, arriving at a design we would prototype and test in our user interviews.

The user interviews were conducted with the invaluable help of i2i Events Group who recruited a group of representative users for us to interview and test the new design with. Given the redesign was driven by the needs of our clients, it made perfect sense to us to involve a client in the process.

Having followed a thought out plan and validating each step we began A/B testing the new design fully expecting it to come out on top. It didn’t.

What had gone wrong? We were confident in the work that had been done, but we had obviously missed something. My thoughts are that the new version made it very easy to take the key actions, however it did not “sell” them to registrants quite so well. People’s primary aim when registering for an event has already been completed when they see our widget. We need to make it easy *and* convince people that they want to take a further action.

Luckily we were able to iterate again on the new design and test further ideas. Several elements of the process gave us confidence in doing this. 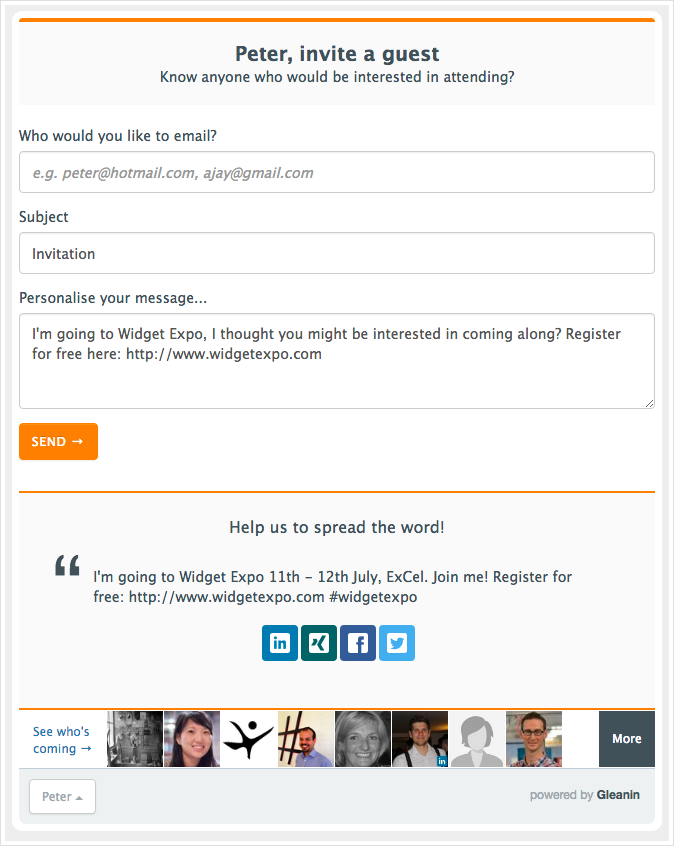 The whole process, from user interviews to A/B testing was really insightful and we’re excited at moving our product forward. Obviously, we won’t rest on our laurels now and we’ll continue to iterate to get the best performing social registration widget we can.

Make your trade show a bigger success. Get more attendees.